A sunset tour to one of Bali’s most exotic tourist objects. Some attractions are offered, including proving the 11th century temple, seeing monkeys with their cunning actions, seeing a spectacular view of white cliffs dropping precipitously into the clear blue sea and if you want to spare extra Rp. 50.000 see Kecak Fire dance performed beautifully on an open stage.
The most important of all is its spectacular sunset. Uluwatu as its name suggests means stone on the corner. This temple was built by an influential priest, Mpu Kuturan, and is associated with Nirartha, the Javanese priest credited with introducing many elements of the hindu religion to Bali. The tour lasts about 3 hours and takes the route of Bukit Peninsula. 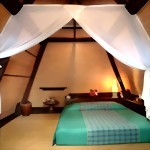